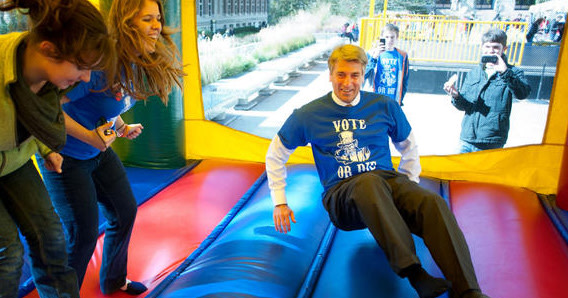 As this year's presidential election comes down to the wire, with no clear majority asserting itself for either candidate, the strength of get-out-the-vote (GOTV) operations are likely to become the critical deciding factor. President Obama's 2008 election was something of a children's crusade, with an unusually active youth vote making itself heard at the polls. Will those circumstances repeat themselves, or is the magic gone? Even if the youth vote were to be high again, could challenger Mitt Romney make some inroads himself with that student demographic? We'll know soon enough. In the meantime, America's colleges are doing their best to encourage civic participation regardless of schools - nursing, health, public relations, counseling, public relations. Here are 10 clever concepts administrators and students have come up with to promote that message: